7 important things we can learn from the Oscars 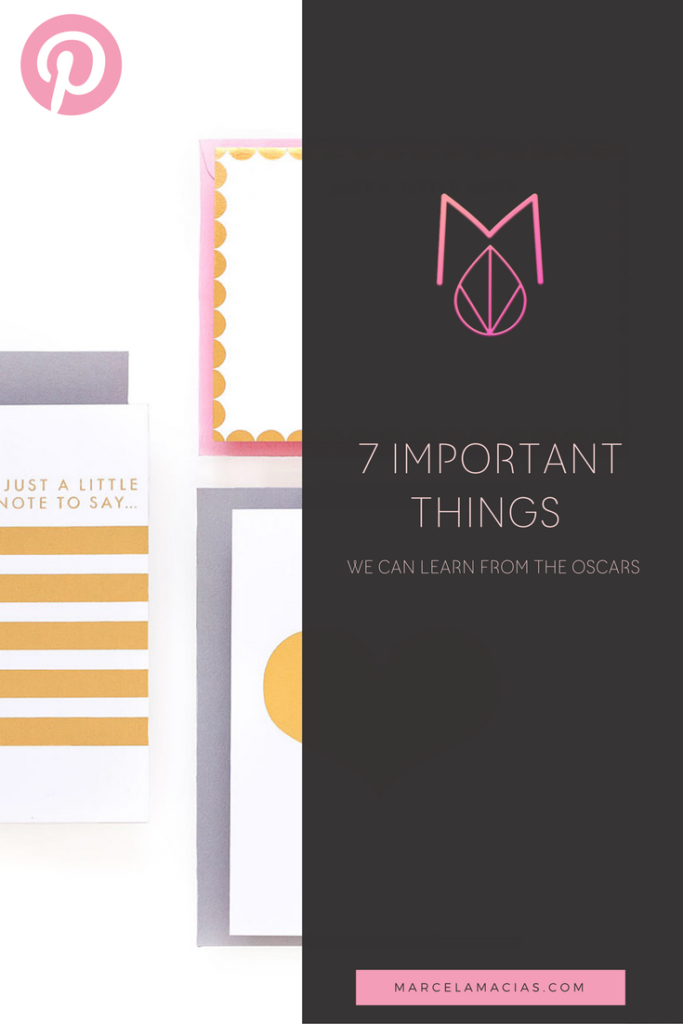 Since I was a little girl, I was fascinated by them…and not just what I saw but by how they were created. I loved watching behind the scenes, documentaries, and searched far and wide for backstage photos so I could imagine what it would feel like to be a part of that magical universe.

And I loved watching the Oscars.

The glamour, the show, the host’s humor, the perfectly choreographed dances, the stunning stage decor…everything seemed so magical, and who doesn’t love magic?

Since I live in Europe, watching the Oscars is out of the question because of the time difference, but I still enjoy checking the lists of winners when I wake up and, sometimes, I catch the final part on TV, if I wake up early enough. It’s my little ritual.

This year, we woke up to the news of the now infamous best movie blunder. I turned on my phone to check the list of winners on CNN, and I saw a big article announcing La La Land as the best movie, and a big red alert saying there had been a mistake and Moonlight was, in fact, the winner.

Twitter was on fire. And as the hours passed, we came to see the full video and to read several accounts of what had occurred and why it had been possible. Which lead me to this post, because so many lessons from what happened  are applicable to online business.

The main question everybody was asking as soon as the mistake was uncovered was “How on earth could this happen?” Oscars are highly rehearsed, and everything is known to be planned to the second, so how was it possible that a wrong winner was announced?

The answer? The most common type of distraction: Social media.

The media reported the accountant in charge of handing the card to Warren Beatty had been tweeting heavily from backstage minutes before doing so and was photographed focused on his phone.

If you’re an entrepreneur working from home, like I am, you’re no stranger to the lure of social media. And you also know that, in order to get things done efficiently and in time, you need to shut it all down when you work. This is a lesson I learned from productivity queen Mayi Carles in her wonderful Life is Messy Bootcamp, and one without which I wouldn’t be able to do anything at all.

When I shoot photos, write blog posts, or do any other type of creative work, my wifi is off, my phone is shut down and all extra tabs in my computer are closed. Working distracted is unproductive and leads to avoidable mistakes.

If you’ve seen the blunder video, you’ll have noticed how confused Warren Beaty looked when he opened the envelope. Everyone thought he was being funny, and creating suspense but, as he clarified later, he was confused by the text in the card and wondering whether what he had was right.

If you’ve seen the way the Oscar cards were designed, you may have noticed the category was written in tiny font at the bottom, and the name of the category was printed on gold over red in the back on the envelope.

If there’s one thing I’ve learned from Marbel Canseco is that design needs to be practical, strategic,  user friendly. If an older person without glasses and hell lot of pressure on them, at the end of a long night,and under stage lights can’t find important information quickly, or read text, there’s a problem. Take a look at this article to see how better design could have saved the Oscars.

The lesson here, I think, is not to assume that because we can understand something, everyone can. Not to presume that because we can find information in our website, others will be able to do so to. Take a look at your analytics to see if your visitors go where you want them to go. Ask your grandma to find your contact details in your site. Ask your dad to find how to book a call with you or hire your services. If they can’t do it, possibly neither will potential clients. A tweak here and there can save you tons of money.

Need more help? Marbel and I talked about this in this episode of Cult of Hybrid.

3. When in doubt, ask questions

When Moonlight was announced as winner, Warren Beatty took the microphone to explain what had happened. When he opened the envelope, he saw that the card said “Emma Stone, La La Land”, so he took a long pause, looked at Faye Dunaway and showed her the card. She gave it a quick read, and announced the wrong winner.

I know I have, many times. Stepping up, specially when under pressure, can be hard.

But what this teaches us, I believe, is that it’s better to follow our gut, and ask clarifications before things escalate. We can always smile and apologize afterwards. Make a joke. But it’s better to be safe than sorry.

And if it sounds too scary, this episode from Marie TV can help.

4. Own up to your mistakes

On Monday night, my husband and I sat down in our living room to see the Oscars ceremony re-run. When the Best Movie award arrived, we noticed that three persons had given their speeches before the mistake was corrected and the right winners were announced. We looked at each other and wondered aloud why it had taken so long…they could have been off the air before the problem was rectified.

The answer came later in the media: the accountants from PWC panicked and had to be pushed on the stage to verify and correct the mistake. And as a result, they’ve been banned from any future ceremonies.

We all make mistakes. Some may be minor, some are bigger. But the rule of thumb, and the most important thing to remember is that, when we do, we need to own up to them, make amends and rectify as soon as possible. Especially when others may be affected by them.

Whether it’s forgetting a meeting, delivering work that is not to the client’s expectations or failing to deliver on what you promise, the rule of thumb needs to be to apologize and make it right as soon as possible.

Do whatever it takes to make it right, because relationships are more important than anything else. Relationships move our businesses forward and a bad reputation can kill it really fast.

And if you’ve let people down, here’s Marie’s advice on how to come back.

5. Things can change at the last minute, so don’t lose hope.

If you’ve been following awards season, you’ll know that La La Land had won pretty much everything until last Sunday. It was the big favorite, which is why no one was surprised when it was announced as the winner for best movie.

And yet, 7 minutes after the announcement, everything changed.

This reminded me of something Denise Duffield Thomas always say in her Lucky Bitch Money Bootcamp: Stay in the room. Things may change at the last minute, but you have to be there, present, doing the work.

It reminded me of so many times in my life when I thought things weren’t going to get better, and yet they did. The solution came. The miracle happened.

Because miracles do happen. But we need to stay in the room to catch them when they do.

When people realized who the real Oscar winner was, two beautiful things happened:

I have deep admiration for how they reacted because they achieved something that normally doesn’t come easy: the ability to put themselves and their hurt or anger aside and be there, gracefully, for what mattered most: making things right and celebrating art.

7. We all doubt ourselves , but that shouldn’t stop us from doing.

The final lesson I took from this event came from a twitter interaction that derived from Barry Jenkins words when he received the Oscar : “This is proof that not even in my wildest dreams could this be possible. But to hell with dreams, this is real”.

Some people took this as a play on La La Land’s “This is for those who dream”, but he clarified the right meaning of his words: 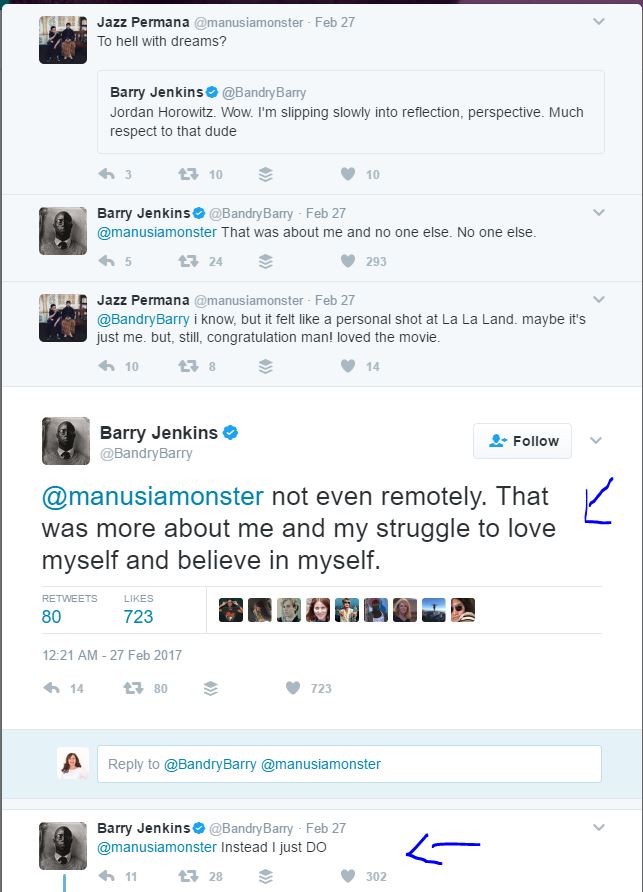 His words reminded me of this episode of Marie TV and about so many conversations I’ve had with friends and colleagues.

His words reminded me of the importance of doing the work we crave doing, even if we don’t believe we’re good enough, even if we doubt anyone will ever like it, even if we want to hide under the bed when the time comes to put it out there.

His words reminded me that we all struggle to love ourselves fully and believe in ourselves, no matter how famous.

And that perhaps our job is not to wait until we overcome self doubt in order to create, but to create no matter what, knowing that doubts, and fear and self-doubt are just part of the road

Our job is not to wait until we overcome self doubt in order to create, but to create no matter what

Now I want to know: Did you watch the Oscars? What lessons did you take from it?